Tūngia te Koingo and Reading Together® in Taitoko / Levin

The Muaūpoko iwi, tangata whenua of Taitoko in the Horowhenua region, is an iwi that in the past has achieved its goals by forming strong community connections. That approach has really come to the fore recently through a partnership between Muaūpoko, the JR McKenzie Trust, Ministry of Education and Levin East Primary School. This partnership is currently achieving more than everyone involved could have hoped for in positively engaging tamariki, whānau, iwi, kaumātua, teachers, and community leaders. ...

CEO of the Muaūpoko Tribal Authority Di Rump says the Ministry of Education helped by providing access to the Reading Together® resources but what's most important is that there's a true and equal partnership around the design and delivery of the programme. The programme puts the Ka Hikitia philosophy into practice by focusing everything on tamariki learning and achieving as Māori – with the emphasis being on the "as Māori" and they’ve gone a step further with a focus on their tamariki achieving as Muaūpoko.

"What we were invited to do was to make sure that Reading Together® was a programme that our whānau and our tamariki would enjoy, as Māori, and especially as Muaūpoko.

"When we asked [our whānau and kaumātua], they expressed a desire to use and incorporate our own spaces and places. So we made the programme just a wee bit longer, and we started and finished it on Kawiu marae. We ran part of the programme in our community whare, surrounded by our artwork. We also used some other significant spaces and places throughout our rohe, and held our sessions in partnership with the school.

"It's been amazing. What struck me recently, at our last session, was when I watched our whānau, teachers, our iwi leaders, the principal from Levin East School, the kids, parents and grandparents all together and it's impossible to tell who was who. That's how comfortable they've become working in this partnership together. That's aside from the amazing feedback and results we're getting, which have been really positive too." 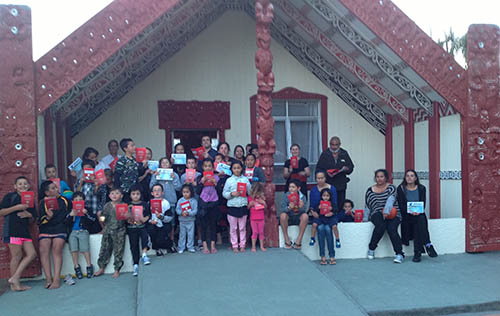 Vicki Hiini of Fairhaven School decided that the best way to engage parents in one of our most translatable and effective literacy programmes - Reading Together - was to take it to a setting that whānau felt comfortable in.
Vicki says that the idea to get Reading Together onto the marae was an inspired one because of the barriers to engagement that it left behind. ...
Reading Together is so broadly successful, says Vicki, because it's perfect for those parents whose own literacy skills might be lacking.
"The programme doesn't involve putting pressure on parents at all. Some of the parents that we had on the course didn't have strong literacy skills. So we need to support those parents to support their children. You're taking away any pressure barriers; they don't actually have to read anything, they don't have to write anything down. It's more about giving parents the confidence."

In a community that is an astonishingly expensive flight (up to $1200 both ways) away from the institutions that mainland New Zealanders rely on every day, the line of separation between school and community at large is far less defined. With this in mind, Maureen and her team realised that their efforts must involve parents. After identifying a need for literacy intervention, Maureen and RTLB Jane Bates on subsequent trips implemented the Biddulph Group-developed programme Reading Together. The purpose of the programme is to support parents to become great 'first teachers', and help their children to get the most out of reading at home. A slow start gave way to enthusiasm and momentum, says Jane.
"On the day I arrived, we worked with the teachers, and then spent two days with parents. On the first day, we had seven parents turn up. We don't ever get deterred by small numbers, but on the second day, 17 parents attended, remembering that this is a tiny school with a roll of 50-odd. Word spreads fast on an island!
"We did a community information session and workshops. That was really great. We were able to take it beyond just working with the school and teachers. I guess that could be said to be one of the advantages of living in a small isolated community; we're able to cover more ground in a shorter space of time.

Reading Together® receives the thumbs up

Reading Together® workshops implemented in schools around the country last year and supported through the Ministry's Reading Together® Project have received a positive review from an independent report. Kate Bleasdale reports on the findings. ...
Confidence levels up
The benefit of the workshops was not confined to reading. Many participants found that what they learned in the workshops could be applied in other areas. Some parents and whānau realised that if they became more involved in their child’s activities, the child would most likely get more excited about them as well. Others found that an increased involvement in reading saw their child build a more positive attitude to learning and school in general.

Family involvement with a child's education varies between schools. Education Gazette looks into a reading initiative that links schools to their learners' whānau, and creates valuable learning connections beyond literacy.

Information on planning and reporting for schools

Research has shown the effective implementation of Reading Together® produces significant learning outcomes for students and a range of benefits for schools, parents and whānau. Principals and teachers are more likely to implement the programme effectively and sustain its implementation over time when they have developed deeper levels of understanding of the programme and its critical success factors.

"Reading Together® is more than a programme, it is a lifelong gift that keeps on giving", says Vicki Hiini, Deputy Principal at Fairhaven School, Te Puke.