Reading Together® Research Evidence: A Summary

The Reading Together® programme was developed, implemented and evaluated by Jeanne Biddulph as a Masters' degree research project at the University of Canterbury in 1982-83. The 1982-83 Reading Together® study was action-research and experimental. It involved a gold-standard, randomised, controlled trial with children in seven schools. All the children in the study were 9-10 year olds who were struggling with reading i.e. reading at least 18 months below their chronological age.

Statistical analysis of the data revealed that, when measured against the comparison group, the target group of 24 children (i.e. those whose parents attended the workshops):

Children whose parents participated in the workshops:

Parents of the target children (including some who had not previously engaged with schools and libraries): 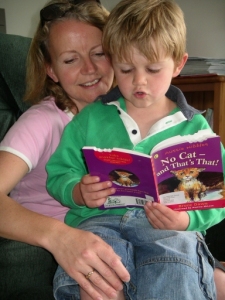 The effect sizes in the 1982-83 research were 0.44 for gains on a standardised GAP test of reading comprehension, and 2.25 for book-level gains, over and above school programme effects [1]. An effect size of 0.35 is the average effect of a year’s teaching in reading in New Zealand [2].

Additional research evidence about Reading Together® was gathered in a 2007 study funded by the New Zealand Ministry of Education. The aim of the research was to explore the implementation of Reading Together® by the senior management team at St Joseph's Primary School, Otahuhu, Auckland.

The 2007 NZ Ministry of Education commissioned research found significant gains (i.e. an effect size of 0.68) in independent reading skills across high and low achieving children and their siblings aged 6-13 years (measured over a two-year period, compared with a control group), over and above a strong school programme [1], [3], [4].

Extracts from letter written by Dr Bryan Tuck in 2016

I have been following the progress of the implementation of the strategy ever since supervising Jeanne's masters dissertation. Initially I was somewhat sceptical of the impact of the programme, but after seeing the outcomes of Jeanne's initial evaluation, which was a very robust design, and talking with teachers involved over the years I concluded that it has numerous positive outcomes. The two most important being the improvement in children's reading comprehension and enjoyment from reading, and the structured way it involves the parents in a productive relationship with teachers. [5]

"Reading Together® is more than a programme, it is a lifelong gift that keeps on giving", says Vicki Hiini, Deputy Principal at Fairhaven School, Te Puke.